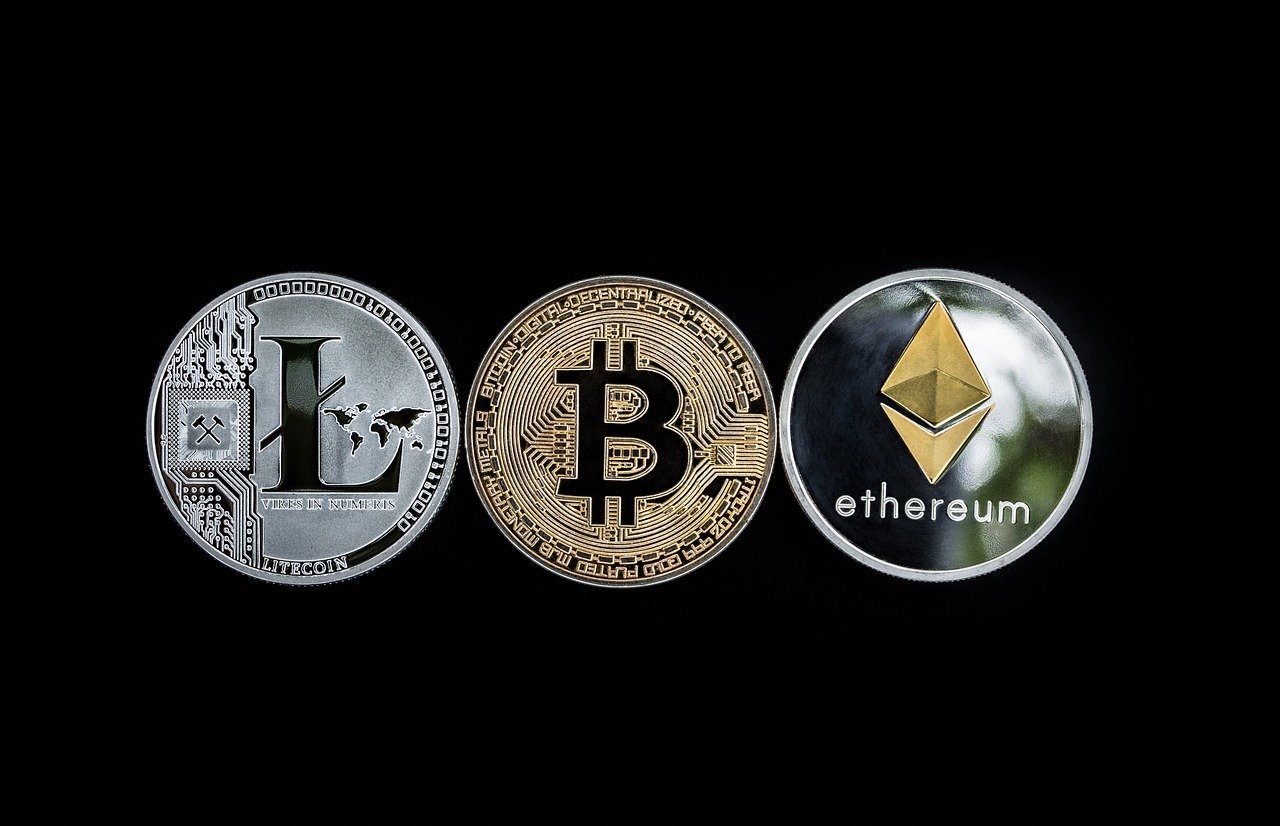 Although the signs in red are lower than yesterday, today the red arrows continue to prevail with over 80% of altcoins in red.

Among the big altcoins, the only two positive signs remain those of Binance Coin (BNB) +0.3% and TRON (TRX) +7%.

Even today, the best of the day is Kusama (KSM) with an increase of over 20%. Followed by Loopring (LRC) and UMA up 15%.

On the opposite side, the worst performance is that of Ampleforth (AMPL) with -25%. Followed by Aragon (ANT) and OMG Network (OMG), both down 16%.

The recent launch of the Polkadot (DOT) token on a number of centralized trading platforms doubled its value from $3.7 to $6.8 billion in just a few days and reached a total capitalization of over $5 billion, placing it fifth in the rankings, overtaking Chainlink (LINK) by around $100 million.

The Swiss project developed by the Web3 Foundation was launched at the end of 2017 and raised over $140 million. So far the project has remained mostly known to industry experts for the inability to transfer the tokens distributed to ICO participants. With the listing on many exchanges, the DOT token will give more visibility to Polkadot’s promising network.

Total capitalization drops to $375 billion after hitting $390 billion on Monday, the highest level since May 2018. 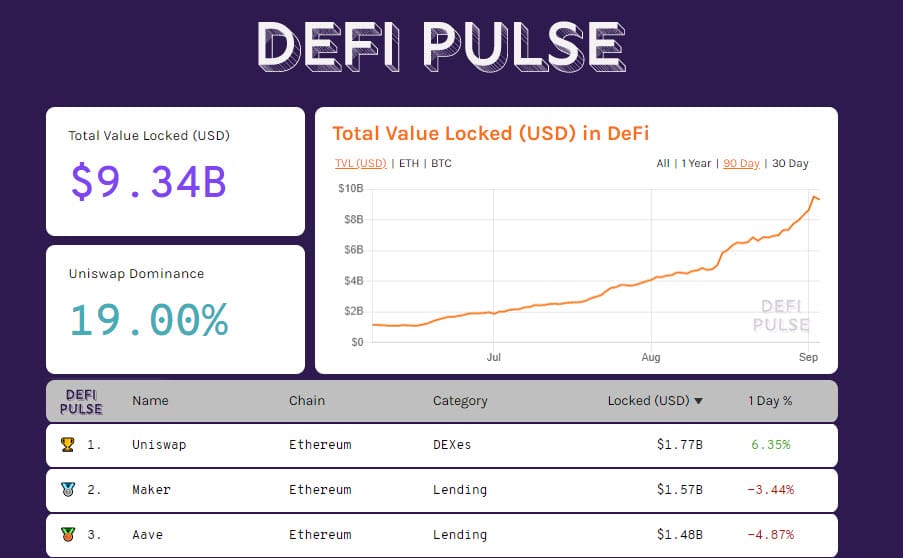 Volumes remain high with over $190 billion total traded in the last 24 hours, much of the credit goes to Ethereum’s prices reviewing the $500 area, the highest in the last two years.

In fact, despite the number of units traded (about 1.6 million), below the highs at the end of July and the beginning of August (over 2 million units), the $3.3 billion dollar value is the record of the last year, the fourth ever.

A brief pause for the dizzying rise in locked capital in DeFi, which yesterday with over $9.5 billion (Total Value Locked) updated the historical maximum of capital transferred to decentralized projects.

For the first time, a DEX, that of Uniswap, rose to first place, collecting over $1.7 billion in collateral locked.

New records of total collateralized Ethereum with over $6.7 million.

Tokenized bitcoin also rose to 72.8 thousand units. For the first time the Lightning Network, a second-layer network based on the original Bitcoin blockchain, gathers 1,055 units for more than $12.5 million. 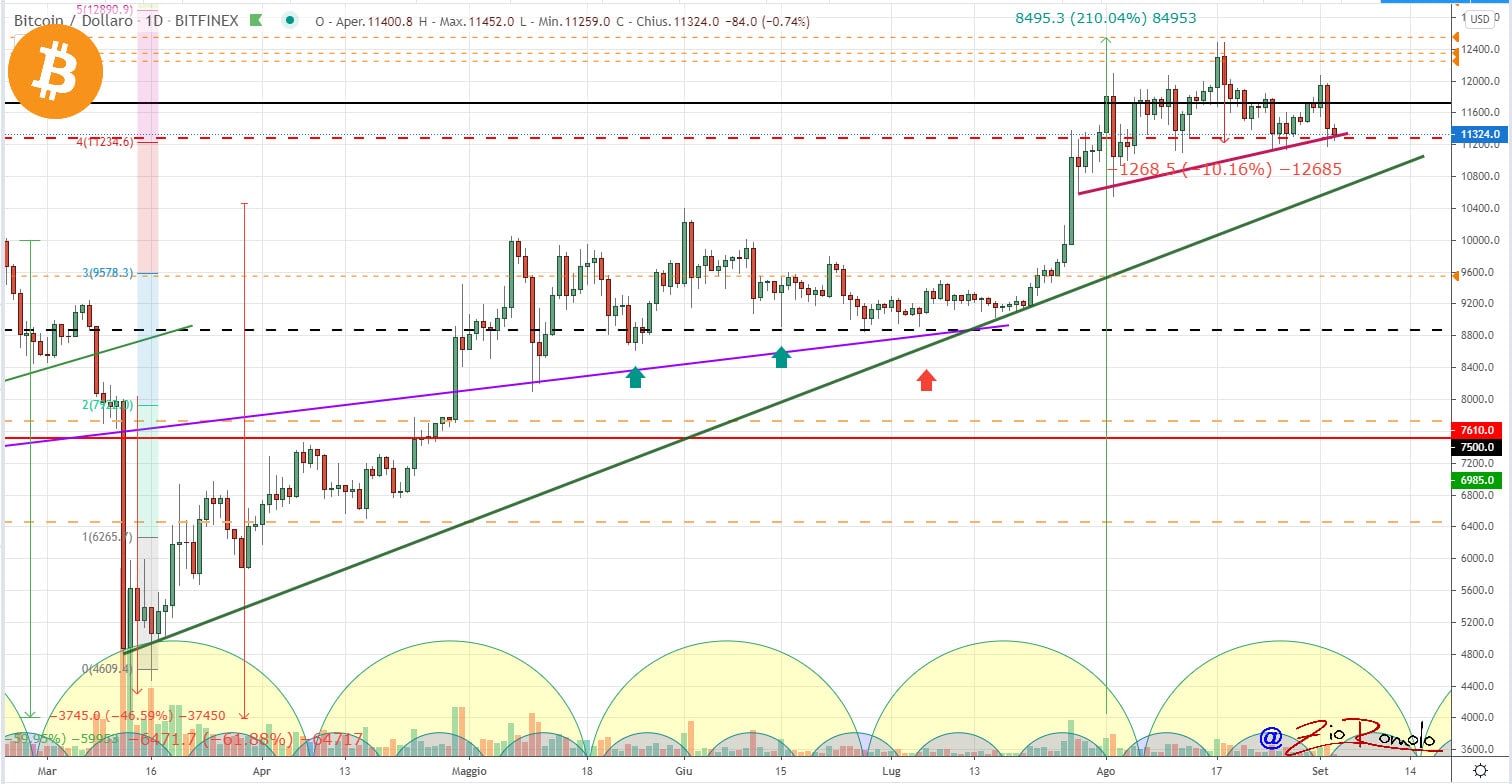 After yesterday’s sinking, prices stopped to test again the $11,200 support, a level that has been tested several times in the last month. It’s necessary to confirm the tightness of this technical base, otherwise it opens a vacuum down to the 10,500 area and the possibility to wake up the bearish medium-term speculation.

This is also known by professional operators who place the covers between 10,700 and 11,250 in the event of a fall. By contrast, upwards, it is necessary to observe the recent highs in the 12,100 dollar area in order to restore hopes of going beyond 12,500 dollars. 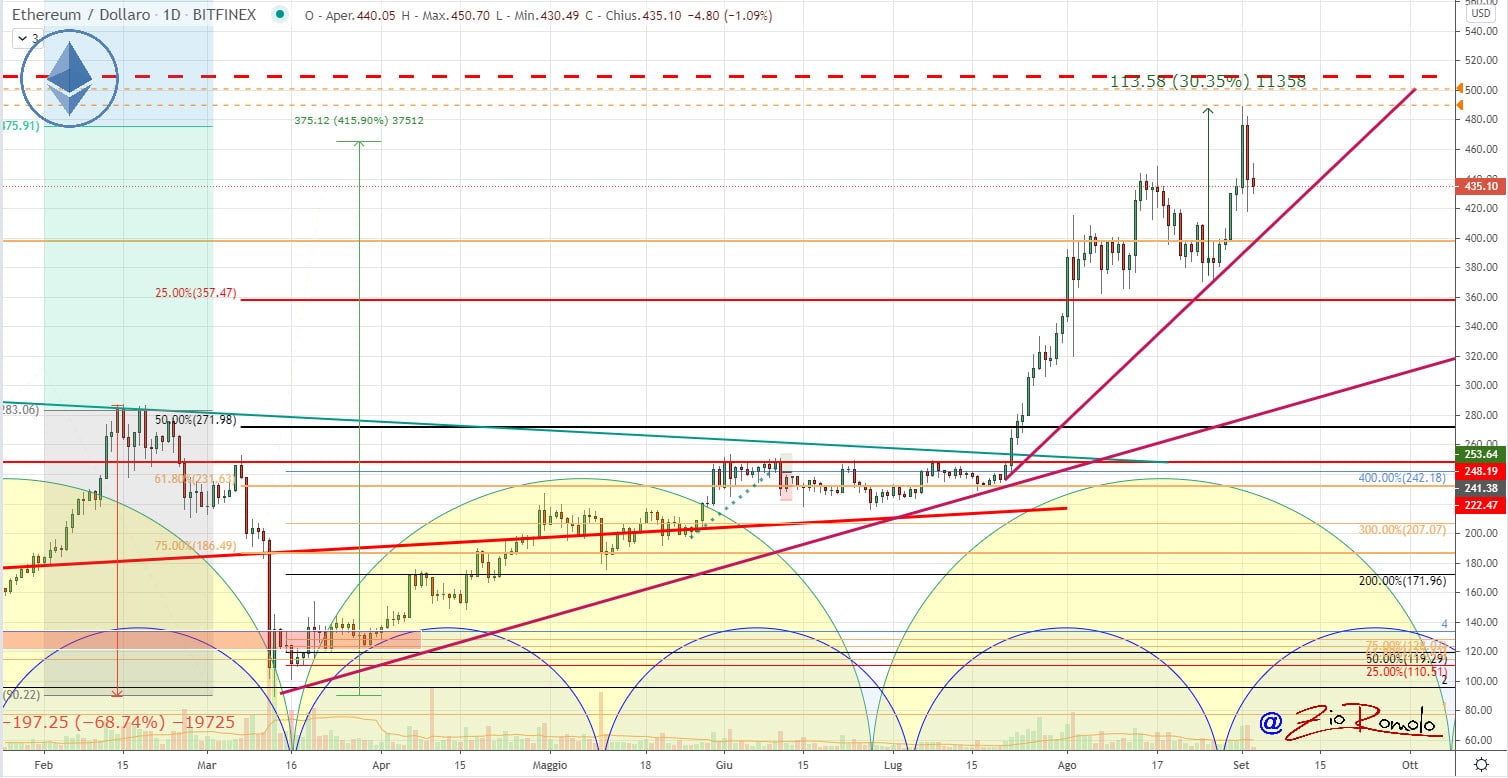 Ethereum: the queen of altcoins in decline

Prices return under the former resistance of August set at $445. After the end-of-August run that pushed prices to a step from $500, the profit-taking pushes the prices back.

Nothing to fear, however, about the bullish trend in the medium term.

Only a return under 415 dollars would sound a first alarm in the short to medium period, which would open the way for descents down to the $355 area where the more solid protections of options operators are placed.