Today’s rise is accompanied by constantly growing volumes. Yesterday the cryptocurrency market saw a trading volume of over $465 billion, the highest since the end of February 2018.

After initial uncertainty yesterday, the second half of the day saw purchases return to the highest levels in recent years.

Analyzing the first three capitalized, Bitcoin, Ethereum and Ripple XRP, the current bullish trend that started in the first days of October is characterizing itself in a different way highlighting a general movement that remains guided by Bitcoin but, unlike the past weeks, is transferring fruitful movements also to Altcoins.

The volumes of cryptocurrencies

Looking at the trading volumes over the last three days, there is an unprecedented amount of continuous trading.

Yesterday was the third consecutive day for Ethereum trading above $3 billion, recording more than $3.9 billion. This has never happened before.

With almost $6 billion traded in 24 hours, it is also a record for Ripple XRP. Never before in the history of Ripple XRP have there been three consecutive days of daily trading on major platforms above $2.8 billion.

Today continues to be dominated by the green sign with more than 75% above parity. Among the big names, only Ethereum (ETH) and Polkadot (DOT) move in negative with decreases between 1% and 3%.

Both take a breath after the strong rises of the past few days with gains of over 30% in just five days.

Bitcoin (BTC) continues to do well, climbing 2% on a daily basis over $19,300, now a step away from the historical records of 2017. From current levels, just over 2% is missing to enter unexplored territory.

Stellar (XLM) with an increase of over 40% returns above 0.21 cents on a daily basis for the second consecutive day.

A positive day with a double-digit rise also for Ripple (XRP), up 10%, although subject to short-term speculation causing rapid upward and downward swings during the same day.

Bitcoin’s market share rose above 61% with Ethereum slipping below 11.8% and Ripple trying to consolidate its dominance above 5%, the highest level in the last 13 months. 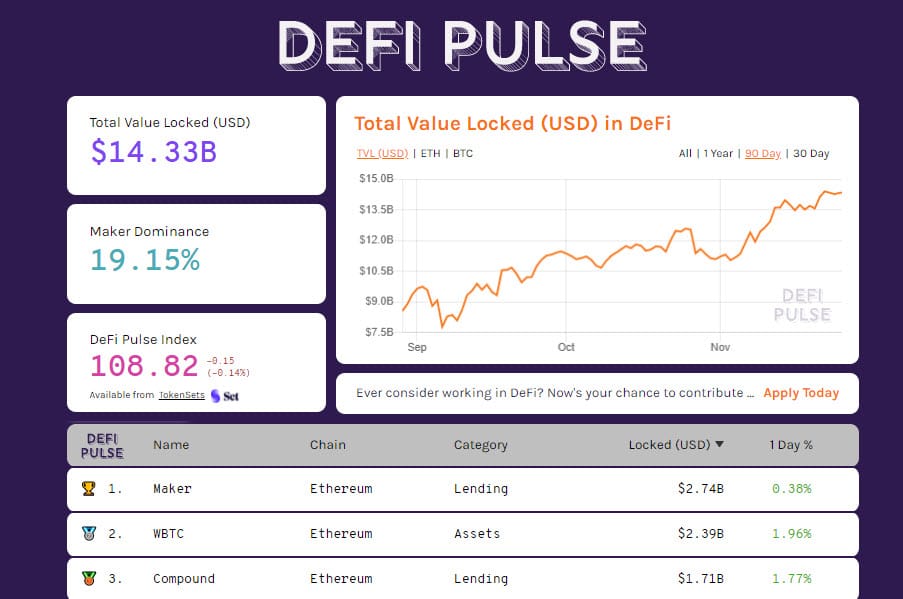 Although Ethereum continues to bleed, falling below 6.7 million ETH locked on the various decentralized protocols, with over $14.3 billion the total value locked (TVL) on DeFi remains close to record levels.

Maker confirmed its leadership in the sector with $2.7 billion, followed by WBTC with $2.4 billion, recording a new record (124,480) of BTC transformed into ERC20 tokens, equal to 74% of the tokenized Bitcoin.

The exponential rise of Bitcoin has brought the quotations back to one step from the absolute historical record set on December 17th, 2017 at $19,891 recorded on the Bitfinex platform.

Since the beginning of the current trend – mid-October – the rise has so far recorded only two days of weakness: November 7th and 22nd. On both days, intraday speculation has caused prices to drop by just under 10%. This is the data to take as reference in a similar context that from these levels does not find better references to consider in case of reversal of the trend.

Translated in operative terms it means that for Bitcoin there is room for downward movement that until $17,400 would not compromise the current upward trend. On the other hand, if the historical highs are exceeded by more than $19,900, this could trigger a rise sustained by euphoria.

The rise of the last five days has brought prices back above $600, the highest level since the beginning of June 2018. A gain of more than 30% in value in less than a week, partly unexpected after the uncertainty that has been characterizing the fluctuations below $500 since last summer.

The upward climb lacks valid short-term support, which is why it is necessary to wait for price consolidation in the coming days to define a level where to attract new purchases to support a climb to new records. Any downward speculative movement should not return below $480.