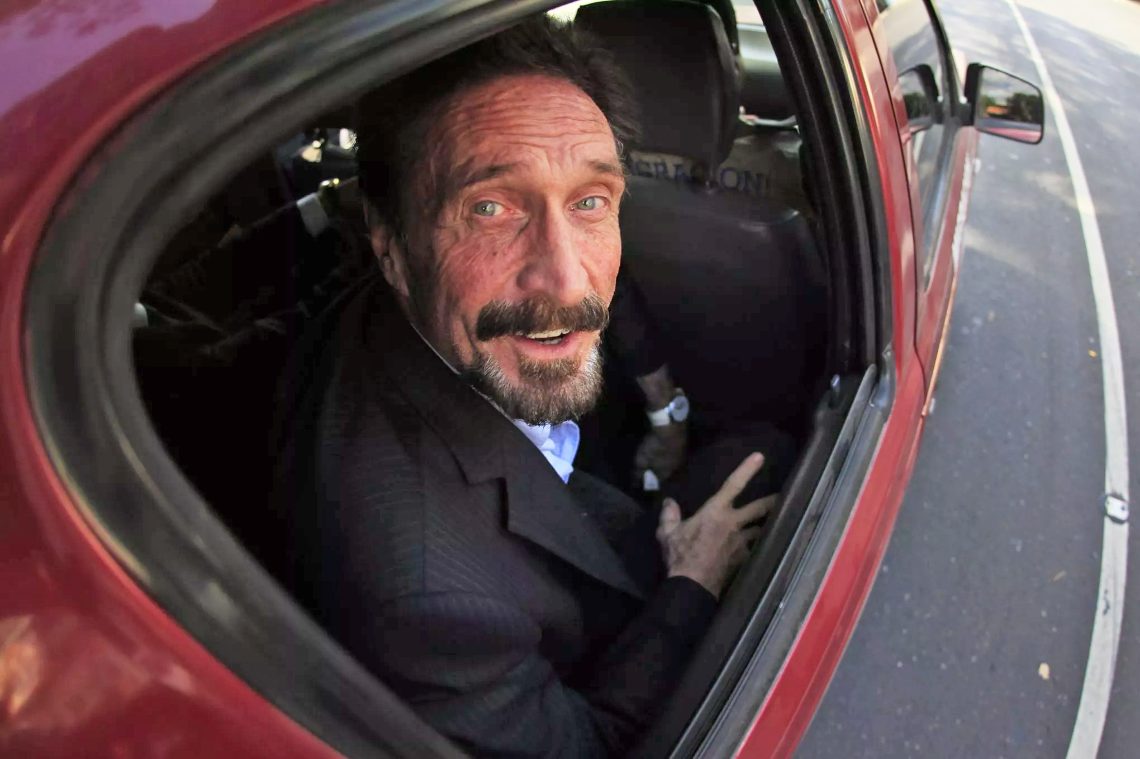 John McAfee, farewell to the antivirus king devoted to Bitcoin

The cryptocurrency world mourns John McAfee, the pioneer of antivirus, who then diverted his interest to Bitcoin.

His was an “inimitable life”, made of fortune (economically speaking), excesses, intemperance, until the last tragic months: the arrest, the jail, the suicide, which left the crypto world in mourning.

Who is John McAfee

John McAfee was born in the United Kingdom in 1945 but soon moved to Virginia. It was in California that he made his fortune. It was 1986 and as a mathematician and computer programmer, he created the first antivirus in history. It was the first step of his McAfee Associates which, with the advent of the World Wide Web, became a leading company for the defence against the computer threats that were already present at that time.

In 1994, McAfee left his own company, selling his shares for 80 million dollars. His fortune was soon dissipated due to bad investments and the 2008 crisis. In the meantime, he continued his dissolute and adventurous life in Guatemala, Belize and the United States, where he was arrested several times and where he was caught in the crosshairs of the law following the mysterious death of a neighbour.

In his later years, he turned to cryptocurrencies. His fortunes returned to grow in the speculative bubble period between 2017 and 2018 when he promoted ICOs. He was accused of having promoted a number of fraudulent ones and of getting rich behind the backs of unsuspecting investors who trusted him, who became an influencer with millions of followers on Twitter.

Politics has also been part of his life: he ran for President of the United States in the Libertarian Party but lost the primaries in 2016. He tried again in 2020 with even less success as he was in exile in the meantime: in the USA he was wanted for tax evasion. He was caught and arrested in Spain in October 2020. It was here, in Barcelona, that he died yesterday, in a prison that had been his home for 8 long months. He should have been extradited to the US, but John McAfee never returned to the US.

John McAfee and the (wrong) predictions about Bitcoin

Back in 2017, McAfee claimed that by 2020 Bitcoin would reach the value of one million dollars. During the September 2018 Blockchain Cruise, McAfee confirmed this prediction to The Cryptonomist. The Cryptonomist and John McAfee met again during the Malta Blockchain Summit in November 2018, an interview focused much more on the film about him covering Bitcoin.

In January 2019, his escape from the United States began. In July 2019 McAfee reiterated his belief: Bitcoin would reach $1 million by 2020. A prediction later doubled: $2 million by 2020. We are well aware that Bitcoin has never even come close to these figures, but McAfee only just anticipated an astonishing rally that led BTC to grow to a record $65,000.

Interestingly, in January 2020 McAfee changed his mind and said Bitcoin was a shitcoin. And in July he called Bitcoin “old tired worthless”.  Meanwhile, McAfee was working on another project, a privacy coin whose name was Ghost. The project was ambitious, but he could no longer follow it because in October 2020 he was arrested in Barcelona.

The mystery of John McAfee’s death

John McAfee died yesterday, by suicide in prison, after 8 months of detention. His inimitable life has met with an equally clamorous exit. In his last months, he talked about prison, his cellmates, his weight loss, even his suffering, and he did so with a series of tweets, and with the constant support of his wife who never abandoned him.

On 16 June, a week after his death, McAfee tweeted that he no longer had any cryptocurrencies and that he had been left alone by his collaborators.

But before this tweet, much earlier, there’s another post to pay attention to. It’s dated 15 October 2020, it’s just 10 days since McAfee was imprisoned and he doesn’t seem to be complaining much:

The food is good. All is well.

Know that if I hang myself, a la Epstein, it will be no fault of mine.

“Know that if I hang myself, a la Epstein, it will be no fault of mine”.

Today this tweet takes on another meaning: what if McAfee’s was not suicide? At the moment, little or nothing is filtering in from Barcelona, except that John McAfee is dead, and the cause is of little importance: the crypto world has lost its most extravagant influencer, just as computer science has lost one of its pioneers.

He will be missed.