Today, 85% of cryptocurrencies are in negative territory, and among these, DeFi tokens are decreasing significantly.

Among the big ones, only Bitcoin is moving above parity. Out of the top 20, only LEO token (20th position) has a positive balance in the 24 hours.

Even on a weekly basis, scrolling through the ranking, LEO together with Bitcoin gain over 2%: they are the only ones to have a positive weekly balance.

When comparing them with the other two of the first three, Ethereum has been losing more than 9% since last Friday. Same fate for XRP.

Bitcoin’s dominance continues to grow and has risen to over 63% in recent hours, the highest level since July.

Capitalisation remains at the levels of yesterday: under $390 billion. Bitcoin, with a market cap above $245 billion, is maintaining the highest levels of the last two years in terms of total capitalization.

Overall volumes remain significant and well sustained above $130 billion.  Analyzing the actual trades, those of the main exchanges during the day, Bitcoin continues to maintain a volume value above $2.5 billion as it did yesterday.

Ethereum, instead, returns to trade just under 800 million dollars. This indicates that traders in recent days are particularly active and prefer to continue to pay attention to Bitcoin rather than the rest of the industry.

Among the few signs above parity is ABBC Coin (ABBC), which has risen by 5% even though it has been under attack from speculation for several days now, which causes the token prices to fly and fall on alternate days.

Dash, among the few climbing, scores a performance of +2%. 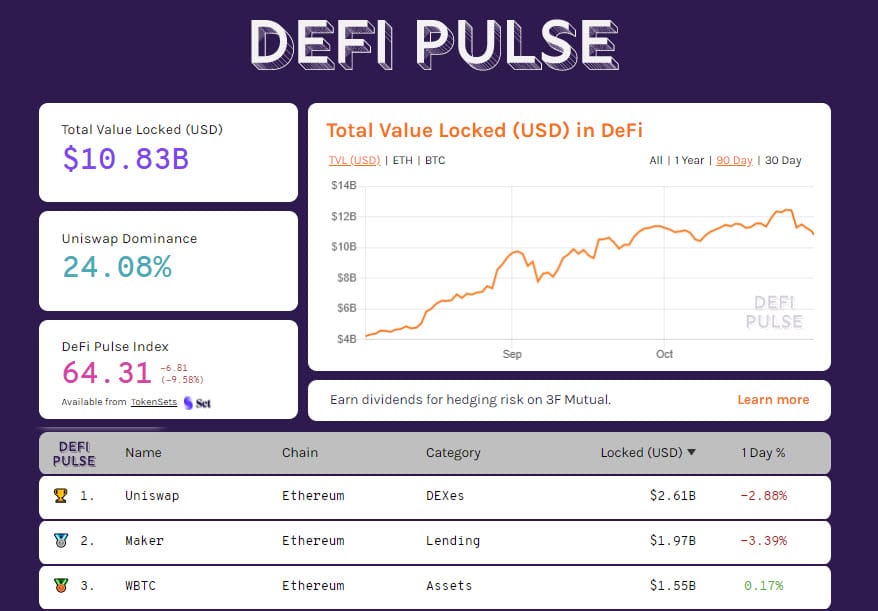 This particular phase of weakness, which comes after weeks of non-stop climbs, can also be seen on the total value locked in DeFi protocols, with TVL falling below $11 billion for the first time after three weeks.

A possible break down could also cause a movement that would not find particular support until $12,300. Therefore it is necessary during the upcoming weekend not to create particular phases of tension.

A recovery above $13,650, levels that in these hours are seeing increases in position by operators in options, could give a boost to attack and exceed the maximums of Wednesday, which are also the maximums of the year.

Ethereum is suffering from the lack of hold of the $390 support that is pushing ETH to test the next support in the $365-370 area.

Any failure to hold this support would open the way to dangerously test the dynamic support that has supported the upward trend of the last 7 months, which passes in the $345 area.