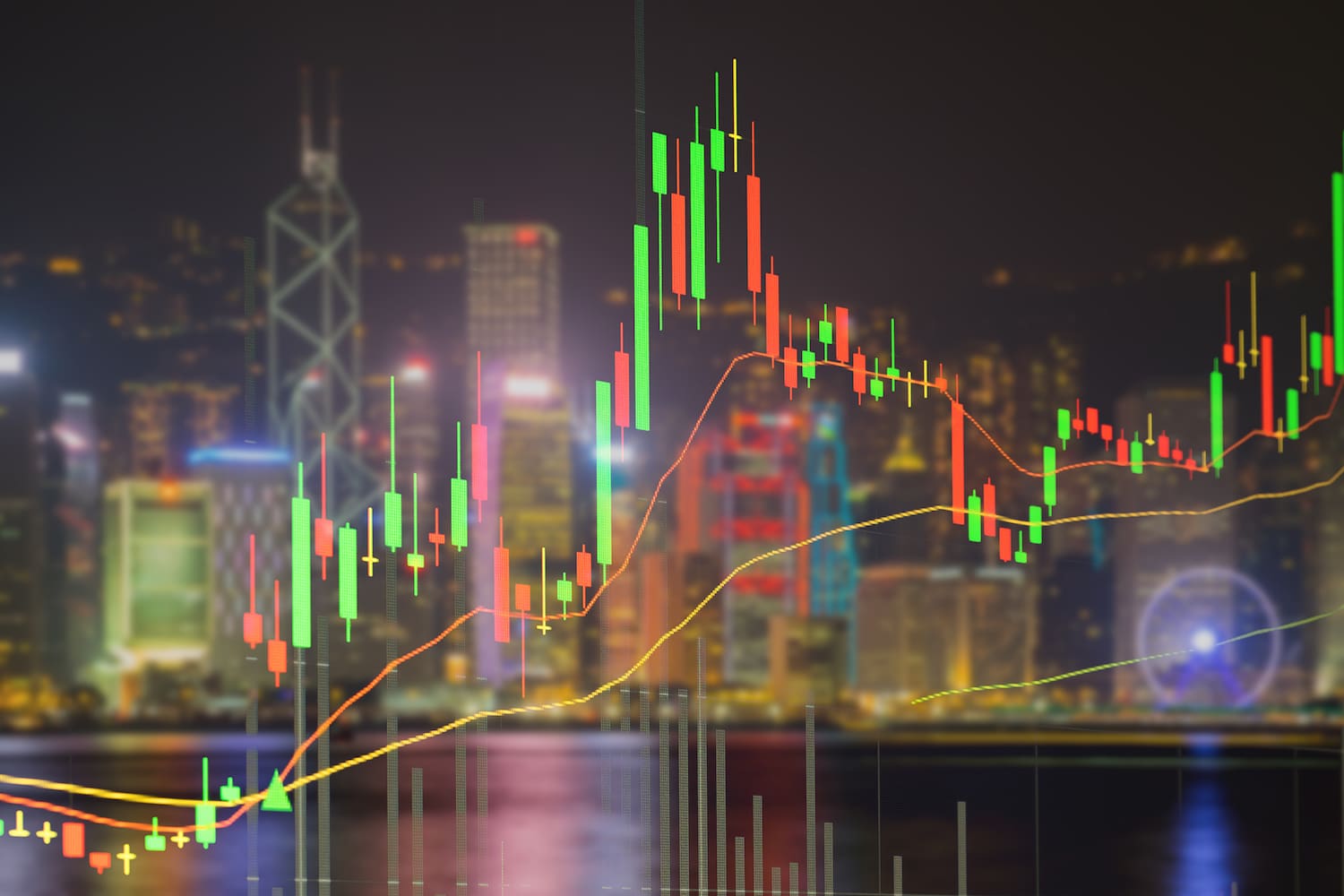 By now it is a common occurrence that DeFi scores record-breaking figures every day. In fact, the value of assets locked on DeFi dApps continues to rise to over $6.35 billion. 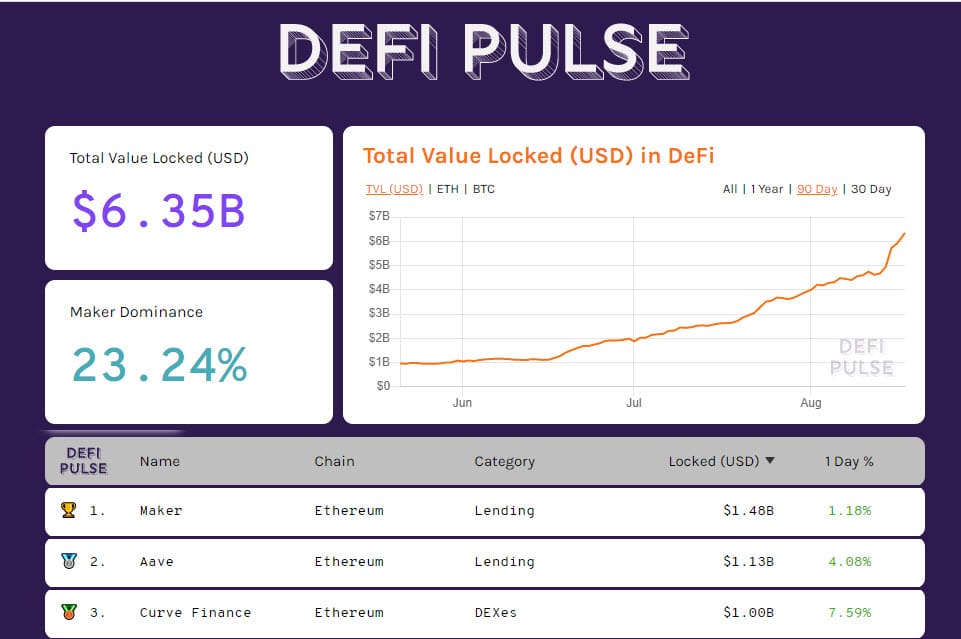 The total amount of collateral locked on Aave jumps over $1 billion, conquering the second position for TVL behind Maker, setting an absolute record of 29.8 million DAI locked.

The token of Aave (LEND) flies over 58 cents, a new all-time high, setting a four-figure performance from March’s lows. Curve also climbs over a billion dollars, surpassing Compound and Synthetix.

Altcoin values in relation to BTC

Although Bitcoin’s price remained close to the previous closing, the week ended upwards for the fourth time in a row. This is a circumstance that has occurred only twice in the last two years: April 2019 and March 2020.

The altcoins are doing better, closing the central week of the month with double-digit increases.

Among the big ones, there is TRON (TRX) with an increase of over 40%. Prices are revising the 30 cents of the dollar, levels at the end of July 2019, rising to 15th position.

Chainlink (LINK) follows with an increase of 35% and new historical records at $20 over the weekend, strengthening the 5th position in the ranking by capitalization, conquered last week. LINK’s uptrend has lasted since the beginning of July and shows a performance of over 300%, exhibiting no signs of weakness.

Very good also for EOS, which marks a climb of over 25% on a weekly basis. Over the weekend EOS prices reached almost $4, the highest level since last February.

The first hours of the new week show a slight prevalence of positive signs with more than 60% above the levels recorded yesterday morning.

The daily quotations of OMG Network (OMG) are flying over 60% with prices above $3.3, a level not recorded since November 2018.

Next come Ocean Protocol (OCEAN), Waves and Ren all over 30% above yesterday morning’s levels.

Total capitalization rises to $375 billion, pushing above the June 2019 highs, confirming the return of confidence with the Fear & Greed indicator stable above 80 points since last week, the highest levels of the last 13 months.

Despite the summer and leisure days, weekend volumes remain toned with total trading at mid-June levels. For Bitcoin and Ethereum the real volumes traded between Saturday and Sunday exceed 2.5 billion dollars. 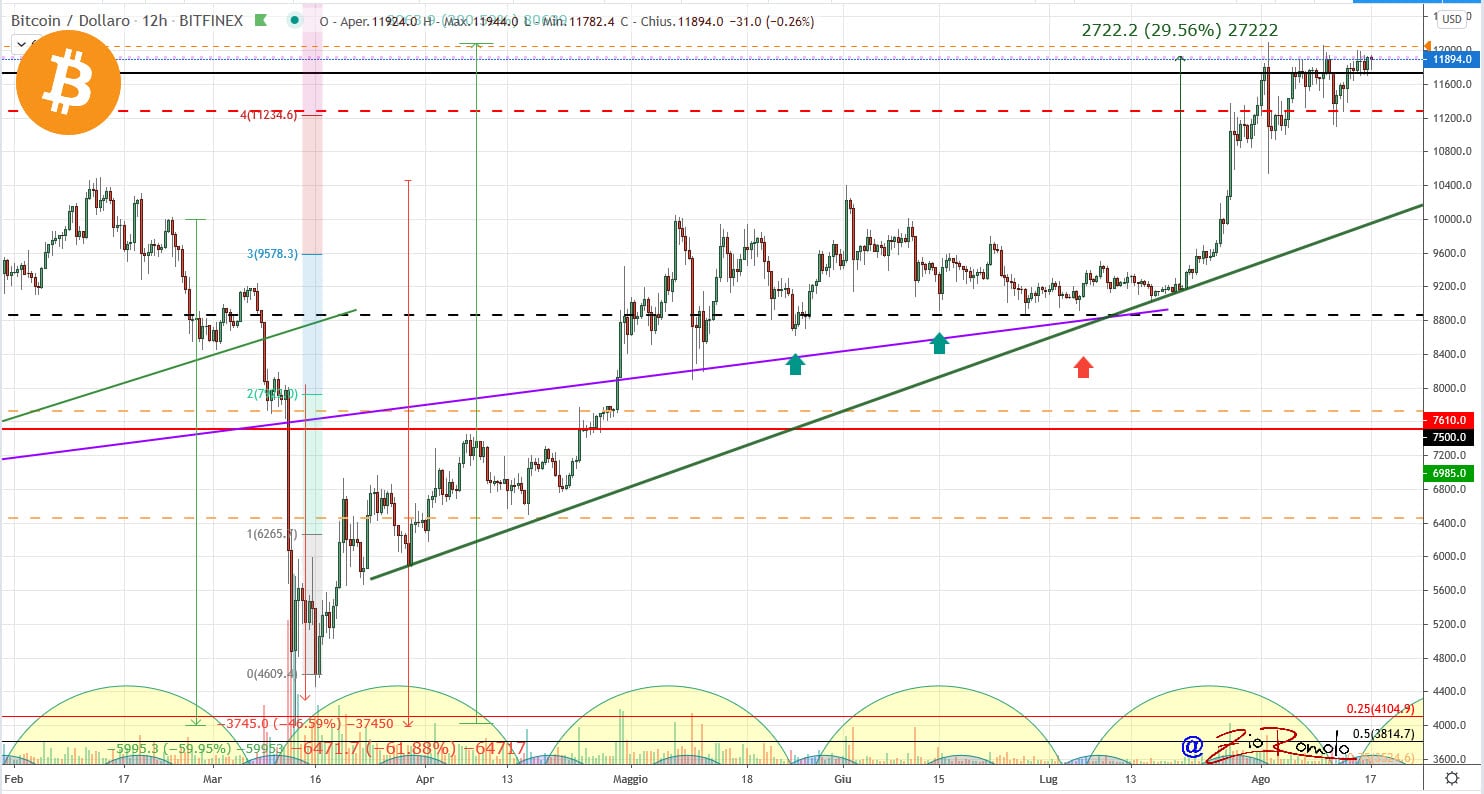 The new hashrate record set in the last few hours (over 127h/hash) does not affect the price, which remains below 12 thousand dollars.

The mid-August attack of the psychological resistance was not supported by the volumes, a necessary condition for a climb to test the technical resistance placed just above $12100, level touched on August 2nd.

The protections of derivatives operators also passed from this level to open upward spaces between 12400 and 12650 dollars. The lack of thrust above $12100 can cause speculative kickbacks down to an area of $10700. Only declines below $10,000 will trigger the first danger alerts. 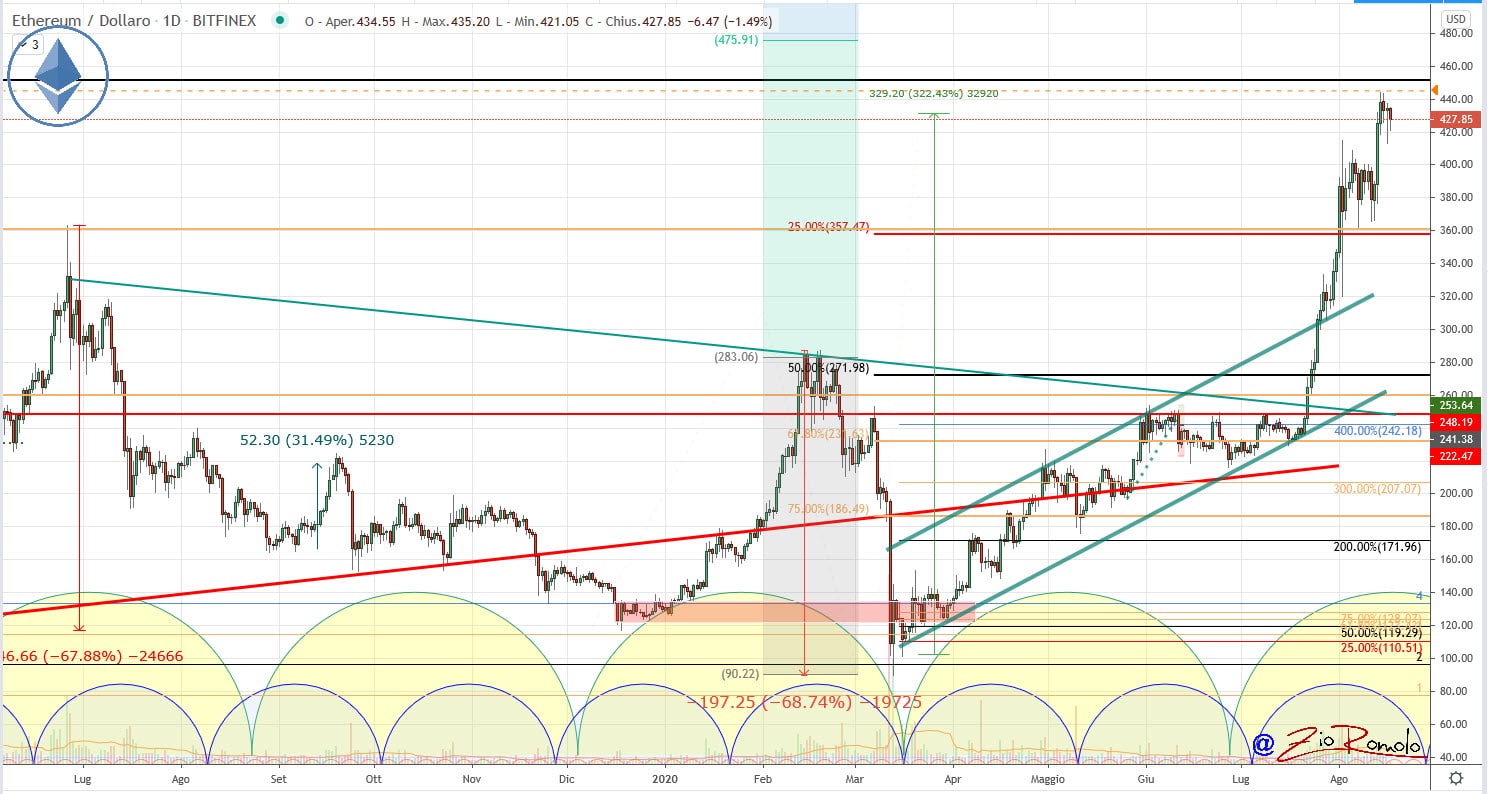 Over the weekend, the price of ETH recorded a new period high above $440, reviewing the highest levels of the last two years. With an increase that sees the value of ETH doubling from the prices at the beginning of July, it is necessary to form valid supports to reject any downward speculative attacks.

It is necessary and healthy to deflate overbought indicators while keeping prices closer to recent highs. The Open Interest of options grows, setting a new historical record despite the public holiday.

Option traders strengthen the downward protection between $400 and $355. Upwards, on the other hand, the strength to cover the recent high in the $443 area increases. This is the level to break down to see a possible extension to the $465 area.

Otherwise, it is necessary to keep the attention high for possible bearish speculations.

Previous article LiteBringer: the Litecoin blockchain game impossible to complete
Next article Socios: the debit card to spend the tokens